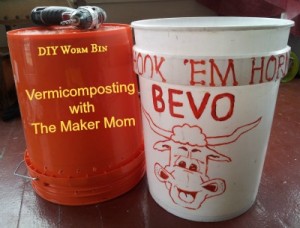 When my husband said, “I want to get you a $200 worm bin composter for your birthday.” The problem wasn’t the worm bin. I’ve been curious about vermicomposting since one of my boys’ teachers set up a class worm composting system back in the day. But to spend $200 on a classy set-up for worms? No thank you.

He threatened to buy it for me unless I made one myself. It was like a dare. I had been mentioning this project on and off for years. It was time to get making and to do it on a budget. With the help of Instructables and Chicago’s Shedd Aquarium, I did!

What’s the deal with vermicomposting? We have two outdoor composters, but can really only make use of the bins during the warmer months. I was interested in trying out worm composting because we can do it inside year-round. The worms eat our leftover veggie scraps and their poop is golden for our garden.

Sound too hippy-dippy? All the cool kids are composting like Kristen Howerton from Rage Against the Minivan and Rebecca Woolf from Girl’s Gone Child. (Okay, it’s Rebecca’s mom, but check out those worms.)

I used two, five-gallon buckets. The white was once filled with frosting. I salvaged it when I worked in an ice cream shop during my high school years. I painted it and used it an a catch-all for random supplies during college and beyond. Well beyond. I can’t believe I’ve kept it around for more than 20 years.

It’s like every moment in my life brought me to this point.

I was destined to be a worm keeper.

I picked up the other bucket from a Big Box hardware store and drilled a bunch of holes in the bottom to allow the “compost tea” to drip out of the of it into the white bucket. I placed the holes about every inch and used a 1/4-inch bit. Guess what? Worms can also escape through these holes. More about that later. 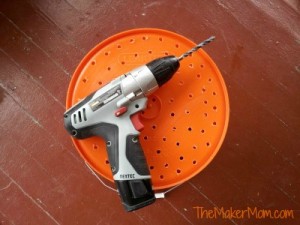 I also put holes alongside the top of the bucket to allow for air circulation. Once all my holes were drilled, I placed shredded newspaper into the bucket. Now, I’m trying to add bits of corrugated (cardboard) as well. 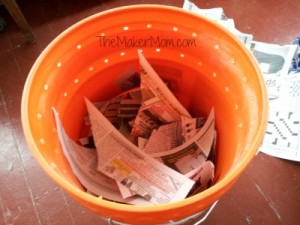 I then wet the paper. I did this on a rainy day, so I let Mother Nature handle this part. Worms need a damp environment, not a dripping wet one. I’ve heard to go for bedding that feels like a sponge that’s been wrung slightly. 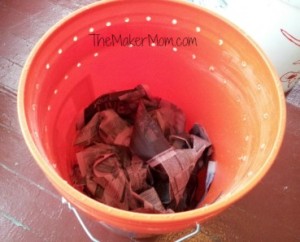 Next up: worms! Not just any worms, but red wrigglers. I was able to pick some up at a local fishing supply store much to my surprise. Apparently they have a bit of a business going with worms for composting. I bought two containers for $6 or so. You can buy them online if you live in a landlocked location. Or if you live near me, I can give you some starter worms. 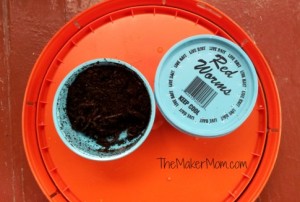 And then food. The Shedd recommends giving the worms a few days to settle in to their new digs before feeding them, but I didn’t read that until after I dumped in a bunch of food scraps. We’re not feeding them meal leftovers as much as we are things we don’t eat like carrot peelings, strawberry tops, banana peels and egg shells. 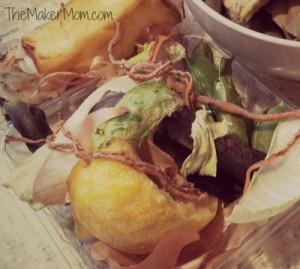 I tucked the food under damp paper and dumped in the worms. I placed orange bucket inside the white bucket and put on the lid. I placed the unit in our basement. Then DH and I wondered if the floor was too cold, even though only the outer bin rests on the floor. 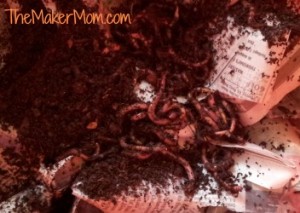 But…the first time I checked on the worms, I saw they were escaping through the bottom and top holes, so I placed the worm hotel in a large plastic bin just in case any did escape though the upper holes. The reality is that they wouldn’t make it far before dying. But still, I didn’t want to find dead worms littered around my basement.

I carefully put most of them back in the main bin, trying not to touch them directly because I’d read that human hands feel like sandpaper on delicate worm skin.

Worms avoid light, so one way to keep them from crawling out the top was to leave the lid off for a little while, encouraging them to burrow down in the dark bedding. As far as the guys escaping out the bottom drainage holes, I found a small LED book light and place it in a plastic bag. I turned on the light, sealed the bag and placed it in the space between the two buckets. A few hours (maybe a day or two?) was enough to keep the worms in the orange bin instead of burrowing out the bottom holes.

It turns out that worms, like some people, can be sensitive to change. It might take a few days for the worms to acclimate.

Worms can be Picky Eaters

Worms can also be picky eaters. Who knew? Meh, like I tell my kids, eat what I feed you or starve. It turns out one response to an uncertain environment is for worms to lay cocoon sacs and the babies that hatch out of those sac will be open to whatever diet the environment provides. After some initial concern, my worms seem to be doing okay with the vegetable and fruit scraps I serve them each week. I am trying not to give them onions, though. Which is odd because who knows what an onion tastes like to a worm? I’ll have to consult with Google on that one.

Invasion of the Worms

Though great at breaking down food matter, the red wrigglers are an invasive species and shouldn’t be sent out in the wild if you live near a forest or river. Turns out the Ice Age wiped out all the native worms in my Midwestern region.

I was so into making the worm bin that I didn’t read up on their care and feeding. There is a small learning curve, but I’ve kept them alive and I’ve seen baby worms, so I know they are reproducing. It’s all good.

I hope the population grows so that it feels like we’re making a dent in our household waste while helping our garden grow. I can see how series of stacked trays could be easier and less messy than my current arrangement. if I commit to vermicompsoting as a lifestyle choice, I think I’ll invest in a fancy worm hotel, but I’m pretty sure I can get one for less than $200.